MFB Fertility empowers couples to take control of their fertility by providing them ways to measure reproductive hormones at home. The Proov test allows women to track progesterone and identify hormonal problems that cause infertility and miscarriage while identifying and treating issues faster and with less cost than fertility centers and IVF treatments. 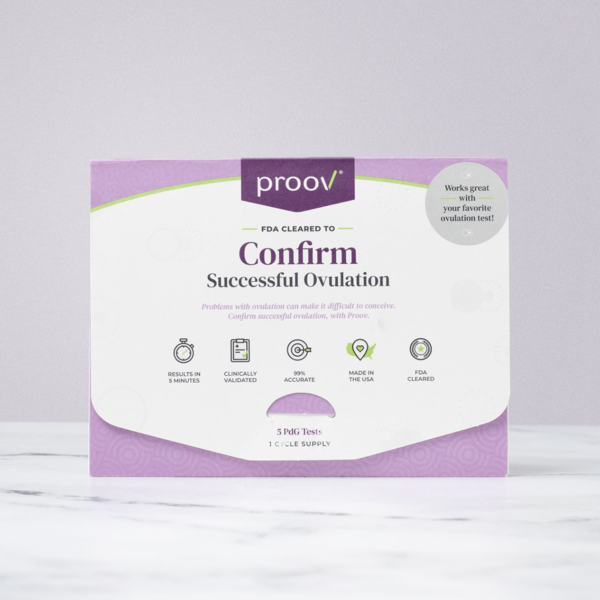 Proov is included in 6 Expert Collections, including Women's Health & Wellness.

Data localization in the US is here

Red state. Blue state. Cloud state. All politics are local – and as statewide abortion restrictions spark fear of law enforcement data subpoenas, all reproductive health data is political. Cloud providers are already facing new challenges as a result. Fertility app Proov knew how important the location of the servers where its data is stored would be, when the Supreme Court draft opinion presaging the overturning of Roe v. Wade was leaked in May. On Monday, Proov kicked off its data migration from AWS and Microsoft Azure to a consolidated new home: Google Cloud. Proov’s decision came down to having the most options for data storage in states that protect abortion rights in order to ward against possible subpoenas for the fertility-related data it stores. It turned out Nevada played a key role in the decision. The company wanted to make sure the sensitive data it handles is physically stored in a state that is unlikely to restrict abortion rights in the future. And it wanted at least one fallback in case state laws change. Both Google and AWS offer data center storage options in California and Oregon, which together issued a multistate commitment last month to defend access to reproductive health care. But Nevada was what tipped the scales toward Google. It was one additional option offered by Google, but not AWS, which Proov believes will be a safe home for its reproductive health data. “When you're talking two versus three viable options, it is significant,” Jeff Schell, Proov’s chief technology officer, told me. The move to Google Cloud will cost the company tens of thousands of dollars, and won’t necessarily save money in the long run, but Proov’s data subpoena concerns are warranted. “If a company houses data in an abortion-restricted state, that state could use the company's presence and in-state data storage facility to present an argument that the company should be compelled to turn over any data in response to a lawful subpoena or court order regarding suspected abortions,” said Bethany Corbin, senior counsel at Nixon Gwilt Law, who specializes in reproductive health tech law. Ultimately, companies handling reproductive health data should look beyond improving privacy and security measures. “They should be minimizing the amount of data they collect and only collecting what is minimally necessary,” Corbin said. There’s a lot more detail in the full story. Check it out. SPONSORED CONTENT FROM FROM SOUL MACHINES They created Digital People. Now they've made celebrities available as Digital Twins: Soul Machines co-founder and CEO Greg Cross and his co-founder Mark Sagar, Ph.D., FRSNZ are leading their Auckland and San Francisco-based teams to create AI-enabled Digital People to populate the internet, at first, and soon the metaverse. $52 billion only goes so far these days Roughly 11,000 chip industry insiders descended on San Francisco this week for one of the largest semiconductor conferences since the pandemic began. Aside from the typical business-related talks during the three-day schmooze-and-booze that is Semicon West, the $52 billion of chip subsidies Congress is weighing came up in discussions both on stage and on the sidelines. $52 billion sounds like lots of money. But for chip companies, it’s not, as Bernstein analyst Stacy Rasgon pointed out on a panel of financial analysts. “I don’t know if this is politically correct in this audience,” he said. “I’m going to say it anyways … for the entire U.S. semiconductor industry, this is a rounding error. Who cares?” At least one person does: Laurie Locascio , Under Secretary of Commerce for Standards and Technology. Locascio agreed the sum of cash itself wasn’t large but said that wasn’t the whole point. The cash on the table is a signal to the industry that the U.S. is committed to building out its chip manufacturing capacity in the long run. “If you look across the board at the money, compared to the industry size, this is a small amount, and it’s a small amount compared to what China is investing in their industry, which is enormous,” Locascio told Protocol in an interview. “But if the [Chips Act] doesn’t pass, it’s an indicator. Chip companies are getting attracted [by] offers and incentives from all over the world to put their fabs there. We have to be in that game, we have to show this industry that we care that the United States really is in this game.” Enterprise moves Over the past week Broadcom announced an executive departure, Microsoft created a new C-suite role, Intel poached talent from TSMC and more. Thomas Krause is going to be the new CEO of Citrix-Tibco . Krause was formerly president of Broadcom Software. Krause’s responsibilities will shift to CEO Hock Tan. Nicole Dezen is the newly created chief partner officer for Microsoft . Microsoft’s channel chief role, previously held by Rodney Clark , will be split into two leadership roles and overseen by Dezen. David Smith was named the new VP of channel sales for Microsoft . Smith will report to Dezen along with Julie Sanford, VP of go-to-market strategy and programs. Matt Hicks was named CEO of Red Hat . Hicks was previously executive vice president of head of products and technologies. Jim Hansen joined Redacted as CEO . Hansen was the co-founder and COO of Mandiant, which was acquired by Google earlier this year. Steve Pinkos joined Intel as senior director of security policy, the company told Protocol. Pinkos previously worked in the White House, the Department of Commerce and the U.S. House of Representatives. Sandy Hogan joined SADA as chief revenue officer . Hogan was formerly senior vice president of worldwide commercial and partner sales at VMWare and worked at Rackspace and Cisco prior to that. David McNeil joined Envoy as chief revenue officer . McNeil was formerly chief commercial officer at Tebra and head of North American sales for Hubspot.

OvuSense offers a fertility monitoring system including medical devices. It is based in Warwick, England.

Paloma Health is a D2C vertically integrated healthcare company focused on hypothyroidism. The Paloma Treatment combines complete at-home thyroid test kits with continuous physician supervision and medical guidance to help treat and monitor Hypothyroidism. The company was founded in 2018 and is based in New York, New York.

tbd health is an at-home, STI screening platform made for women.

Deep Longevity is developing explainable artificial intelligence systems to track the rate of aging at the molecular, cellular, tissue, organ, system, physiological, and psychological levels. It is also developing systems for the emerging field of longevity medicine enabling physicians to make better decisions on the interventions that may slow down, or reverse the aging processes. Deep Longevity developed Longevity as a Service (LaaS)© solution to integrate multiple deep biomarkers of aging dubbed “deep aging clocks” to provide a universal multifactorial measure of human biological age.