Icosavax co-founder and UW researcher Neil King talks vaccine development in the ‘digital era’ October 6, 2021 at 10:19 am Share Coverage of the 2021 GeekWire Summit , bringing together business, tech and community leaders for inspiring discussions about the future. University of Washington vaccine researcher and Icosavax co-founder Neil King at the GeekWire Summit in Seattle on Tuesday. (GeekWire Photo / Dan DeLong) We are now in the “digital era” of vaccine development, University of Washington researcher Neil King said at the GeekWire Summit in Seattle on Tuesday. King talked about how to prevent the next pandemic and also discussed the rise of experimental vaccines for COVID-19, flu and other viruses based on research from the UW’s Institute for Protein Design, where he is an assistant professor. “Ultimately I think computational protein design, in combination with technologies both old and new, is going to allow us to make vaccines that are safer and more effective against targets that have historically been really difficult,” said King, who co-founded the vaccine company Icosavax , which went public this summer . Icosavax is moving forward with phase 1 and 2 clinical trials for a COVID-19 shot based on IPD research. King’s lab deploys computational methods to predict how proteins behave and fold into specific shapes. Icosavax creates virus-like particles with technology licensed from the University of Washington’s Institute for Protein Design. (Icosavax Photo) “That gives us the ability to make up scaffolds of different sizes and shapes and symmetries and test which one works best,” he said. After landing on a design, the researchers engineer protein scaffolds with viral proteins stuck to them. That is the basis of their experimental vaccines. “We find when we attach viral and bacterial proteins to these scaffolds, just as we hypothesize, they instruct the immune system to make higher levels of protective antibodies, and that makes a more potent vaccine,” said King. Icosavax’s COVID-19 vaccine candidates are  studded with 60 copies of the spike protein on a spherical scaffold. The experimental vaccine is shelf-stable , key for nimble global distribution. Icosavax is also conducting trials for a shot against respiratory syncytial virus, which causes pneumonia in infants and the elderly. The experimental flu vaccine contains proteins from four flu viruses on a single particle. It’s designed to prompt an exceptionally strong immune response to potentially “protect not only against this year’s flu virus, but next year, too, and the years after that,” said King. Developing such a “universal” flu vaccine has long been a goal of vaccine developers, and has the potential to supplant the annual cycle of flu shot manufacture to the strains that arise each year. The shot is now moving forward into clinical trials at the National Institutes of Health . (GeekWire Photo / Kevin Lisota) King talked about how far vaccine development has come. For much of the 20th century, vaccines were made from whole viruses or bacteria, typically highly weakened versions of microbes that did not cause infection but protected from disease. In the 1980’s, researchers began to make vaccines with single viral or bacterial proteins or parts of proteins, such as improved vaccines for whooping cough and hepatitis C. Today, the RNA-based COVID-19 vaccines from Moderna and Pfizer typify the “digital” era, he said. These shots are built from RNA, which disappears from the body shortly after instructing the manufacture of a protein similar to one in the virus, prompting an immune response. And that design makes for nimble development. The first clinical trials for the RNA vaccines were underway last year barely two months after the sequence of the COVID-19 virus was published in early January. In the question and answer period after his power talk, King explored the possibility of making a broad vaccine against multiple coronavirus strains. One approach is to stud a scaffold with proteins picked from multiple strains, much like King’s group is doing with the flu. Research in King’s lab and that of other scientists is currently laying the early groundwork for “universal” coronavirus vaccines. “Ideally, you prevent the next pandemic, rather than responding to it,” said King. 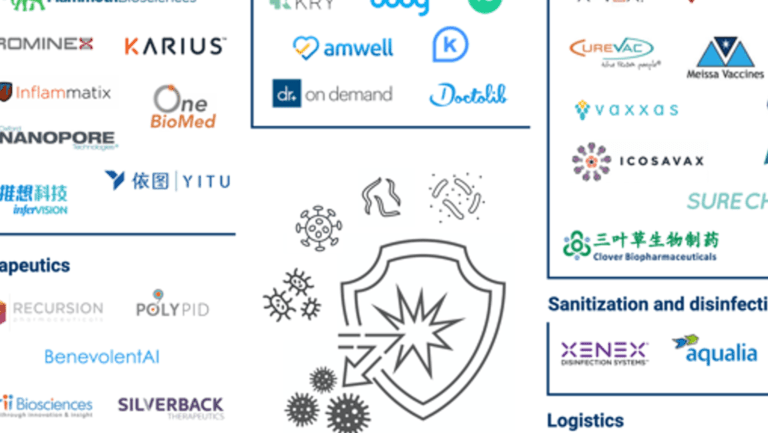 Icosavax is included in 2 Expert Collections, including Biopharmaceuticals.

Entities aiding the surveillance, screening, prevention, diagnosis, treatment, and containment of infections & the maintenance of public wellbeing during outbreaks.