Provider of mobile-based healthcare services. The company's technologies pair users with doctors in their online platform, providing healthcare services and guidance services for the patients 24 hours a day 7 days a week, while reducing costs and waiting times.

Aveanna Applauds 2022 Proposed Payment Rule, Sets Sights on Home Health Growth In the wake of going public in the spring, the leadership team at Aveanna Healthcare Holdings Inc. (Nasdaq: AVAH) has been especially vocal about its appetite for major growth. The company’s leaders echoed this sentiment, highlighting a focus on home health in particular, during its Q2 2021 earnings call on Thursday. “Home health and hospice continues to be a significant focus of our future growth and has been a point of emphasis for us as we work to expand our national home health presence,” Jeff Shaner, chief operating officer of Aveanna, said during the conference call. Advertisement As a strategy, it makes sense for Aveanna to prioritize home health. Shaner noted that 95% of revenue from the combined hospice and home health segment was derived from the latter business, making it a “key focus” moving forward. Aveanna — the product of a merger between Epic Health Services and PSA Healthcare — was once known for mostly caring for complex pediatric patients. The company officially entered the senior care space through its purchase of Five Points Healthcare. As an organization, Atlanta, Georgia-based Aveanna offers home health and hospice services across 30 states. Advertisement Aside from growing its home health business, the current reimbursement landscape was also top of mind for Aveanna during its Q2 call. Aveanna’s government and payer relations teams have been working closely with different state legislators, state administrations and the company’s managed care partners to “create new avenues for patients to receive care in the home.” As a result, over 50% of the states Aveanna offers services in will increase the reimbursement rate and/or expand the covered benefit for the company’s services, according to CEO Tony Strange. “The net takeaway is that state Medicaid agencies and managed care plans alike are recognizing the important role that home care can play in reducing our overall health care spend,” Strange said. “These investments into the home care benefit will allow providers to make additional investments into caregiver wages, which should accelerate growth for the industry.” During the call, Aveanna also touched on the U.S. Centers for Medicare & Medicaid Services’ (CMS) home health proposed payment rule for 2022 . The company views the rule as an overall positive for the industry, specifically the proposal’s 1.7% increase in Medicare payments to home health providers. Another positive was the indication that CMS is moving forward with its commitment to evaluate value-based pricing, according to Strange. Recommended HHCN+ Exclusives “There are several legislative efforts underway, such as Choose Home , to elevate the impact that home care can play in helping post-acute care patients transition back to their homes and allowing them to age in place,” he said. “We believe the investments that we have made and are making into our clinical delivery model, as well as our clinical documentation system, [positions us] to be on the right side of value-based reimbursement.” Ultimately, Aveanna believes the reimbursement environment will create tailwinds for the industry in 2022. Along these lines, the company believes that its diverse payer mix has given them a significant advantage. Across all payers, Aveanna has no single source that represents more than approximately 11% of its overall revenues. “This dynamic gives us great comfort in any downside scenario, but in the meantime, the horizon is clear, and the home care industry appears to be solidifying its relevance in the health care continuum,” Strange said. On the M&A front, Aveanna completed its acquisition of Doctor’s Choice, a home health business with 16 branches throughout Florida. The deal further cements the company’s place in the senior care home health space and increases its footprint in the state. At the time of the acquisition, Doctor’s Choice was producing revenues of approximately $70 million annually. The transaction officially closed in April. “The deal flow remains robust, and as a result, we have several deals at various stages of our process,” Strange said. “Earlier this year, we disclosed that our goal was to acquire between $150 million and $200 million of revenue per year moving forward — with a heavier slant toward home health assets. With the closing of Doctor’s Choice … and the various deals that we are engaged with currently, we are confident that we will meet and exceed our M&A goals for 2021 and beyond.” Financial results Aveanna reported revenues of $436.1 million for the second quarter of 2021, a 24% increase compared to $351.6 million for the second quarter of 2020. The company’s home health and hospice segment brought in $50.1 million, a 59% increase compared to the first quarter of 2021. “This was driven by 11,700 total missions, approximately 61% being episodic admissions, and 10,300 total episodes of care,” Shaner said. “Episodic admissions grew 87%, while total episodes of care grew 81% over Q1 2021, primarily due to the impact of the Doctor’s Choice acquisition and strong organic growth from the Recover Health and Five Points businesses.” Shaner noted that this was only Aveanna’s second full-quarter reporting home health and hospice metrics, and that the company reported sequential quarterly growth instead of year over year. Aveanna’s private-duty services segment reported $349.7 million, an 11.3% increase year over year. “Revenue was driven by 9.92 million hours of care provided during the quarter,” Shaner said. Share 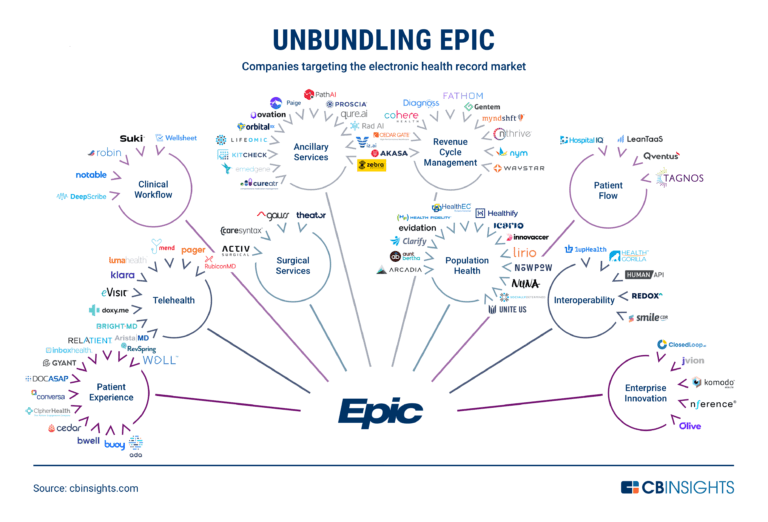 Unbundling Epic: How The Electronic Health Record Market Is Being Disrupted

Epic Health is included in 1 Expert Collection, including Digital Health.