101 Avenue of the Americas 4th Floor 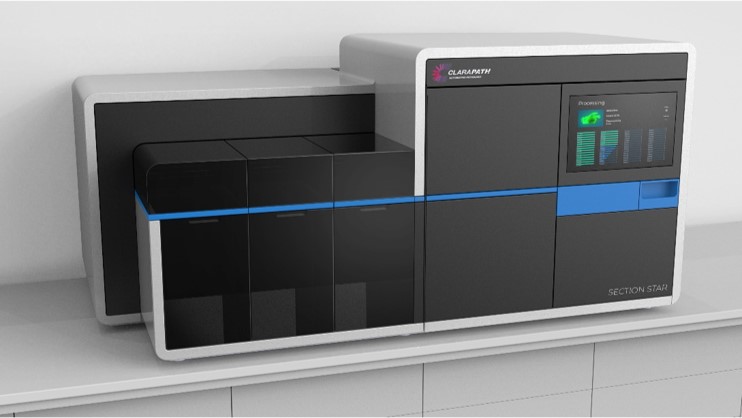 Companies in this market offer software to assist providers in making decisions surrounding diagnosis and optimal treatment regimens for patients. Solutions can range from tools that identify potential drug interactions to systems that use artificial intelligence to support diagnosis.

Clarapath named as Outperformer among 15 other companies, including Tempus, DrFirst, and ClosedLoop.ai.

SectionStar is the first, fully automated, all-in-one tissue sectioning and transfer system that will dramatically increase capacity, reliability, and consistency while minimizing the need for highly skilled labor.

Clarapath is included in 4 Expert Collections, including Medical Devices.

Maiya Focht August 26, 2022 The world of pathology may be welcoming a new robotic co-worker sometime soon. Clarapath Inc , a New York–based biotechnology company, has created an instrument called the SectionStar to automate the pathology process. The device has yet to enter the market and is currently under review by the US Food and Drug Administration (FDA). Eric Feinstien, the CEO of Clarapath, told Medscape Medical News that they developed the instrument in response to a nationwide shortage of histotechnology personnel and to stave off what he believes would be a public health crisis. "The problem is there's not enough people. So that's what led to the genesis of Clarapath. It was, 'How do we automate this labor shortage problem, which is very technical and is also very subjective?' " The SectionStar works like a sealed and environmentally controlled deli meat slicer. The face of a mounted tissue block moves across a microtome blade rhythmically. In June, the device passed the final step in the process before FDA approval, UL certification , which puts it on the horizon for clinical use. Feinstein, who has a background in healthcare venture capitalization, hopes the device, which is about the size of a traditional lab bench, will be in hospitals and clinics in a year or less. The SectionStar isn't the only device of its kind, although it is the furthest along, said Danny Milner, MDM, MSPH, professor of immunology and infectious diseases at the Harvard T. H. Chan School of Public Health. In an interview with Medscape, Milner pointed to the Japanese company Sakura Finetek, which has a device called the Tissue-Tek AutoSection . It functions in a way similar to the SectionStar. Both have what Milner calls "frankensteinian" elements. "There's a lot of moving parts; you could see how things could break." He isn't sure that they'd be useful for every lab. Each lab differs with respect to the quantity of samples it processes, and they employ different numbers of histotechs — not to mention different budgets. Milner also expressed concern about space. Although the devices aren't huge, they do take up more space than a microtome. And in a clinical environment, Milner said, space is often at a premium. There are additional doubts that any device could do this work as well as a human, because the microtome process involves a lot of creative problem solving, said Milner. In a Zoom interview with Medscape, he ran through a short series of the many decisions a histotech may have to make in slicing a block: A sample may be too warm or too cold to cut, the tissue may be oriented incorrectly in the wax, a tech may have to reprocess the sample, or they may have to change blades. "That's really the art of histology," he says. "There's a lot of thinking, artistic things that have to be done. So, it's very difficult to duplicate with a machine." But the US is expected to have a shortage of these highly skilled workers, according to a report from the National Society for Histotechnology . The report places the retirement rate of technicians at 13% during the next 3 to 5 years, while program enrollment for new histotechs has decreased by 13%. Currently, the average age of histotechs nationally is 43 years. Simultaneously, there's been an 11% increase in job opportunities. All those signs point toward a potential shortage in a field that is already rife with discontent. It regularly ranks in the bottom 10%  for job satisfaction in surveys. Even with his concerns about the complexity of the microtome process, Milner thinks the SectionStar will be effective in certain scenarios. "It seems to me from the [Clarapath] video that they have solved a lot of the challenges that we anticipate in similar ways to what Sakura has done in their version, yet Sakura is not yet on the market," he says. There are a couple key differences between Clarapath's and Sakura's products. In the SectionStar, tissue slices are picked up by a rolling track of tape and are then deposited onto a slide. In the Tissue-Tek AutoSection, tissue slices are placed on the slide using a water bath, which is controlled by a histotech. "Both of those are fraught with peril," said Milner. The water bath can never be totally controlled. Water, after all, is water and has natural entropy. But tape transfer methods don't always work either. If temperature or humidity is off, the tape may not stick to the slide forever. Feinstein parried that concern by highlighting the closed system and environmental control elements of the SectionStar. He says cutting off the process from the outside lab environment means they're able to get a secure transfer more often than when using a water bath. While accounting for these concerns, there's still the rigorous process of FDA approval to surmount. Until the device is approved, Feinstein says he can't put an exact number on what it will cost. His best estimate puts it in the $100,000s as a fixed cost. With those figures, the company estimates a SectionStar would yield a positive return on investment in 12 months.

Carevive Systems is an oncology-focused health technology company focused on understanding and improving the cancer patient experience. The platform enables providers to deliver quality cancer care, and patients to be more engaged in their care. The use of Carevive in the clinic unlocks critical data on the real-world cancer patient experience to continuously improve patient care today and provide better access to novel therapies in the future.

ClosedLoop is healthcare's data science platform. It make it easy for healthcare organizations to use AI to improve outcomes and reduce costs. Purpose-built for healthcare, ClosedLoop combines an intuitive end-to-end machine learning platform with a comprehensive library of healthcare-specific features and model templates. Customers use the Explainable AI to drive clinical excellence, operational efficiency, value-based contracts, and enhanced revenue. The company was founded in 2017 and is based in Austin, Texas.

The ProtoLytic is a decision support system for healthcare providers. The system uses statistical and clinical modeling to create a unique Treatment Plan for the patient based on evidence-based guidelines and the interdependencies between related diagnosis and patient demographic data.

Glytec offers a clinician-directed algorithm for effective, standardized glycemic management throughout the hospital. Its Glucommander Enterprise provides a point-of-care technology solution for managing all insulin-requiring patients. The company was founded in 2006 and is based in Waltham, Massachusetts.

Rx.Health is defining the delivery of Digital Medicine. Dedicated to facilitating the digital transformation of healthcare. Rx.Health’s flagship product, RxUniverse, is an enterprise-wide Digital Medicine delivery system that integrates with provider electronic health records. Clinicians can prescribe evidence-based digital therapeutics, multi-media education, wearables and more to patients at the point of care. Population Health departments can onboard whole populations onto digital care plans at the click of a button and highlight patients who require interventions early.