Adlatus Robotics is the developer of CR 700, a fully automated robot for cleaning & maintaining large areas such as supermarkets, airports, hospitals, and more. CR 700 features a range of features for day-to-day operations, including reliable navigation, intuitive touch interface & control via mobile device, automated return to its service station, and connectivity & documentation - resulting in cost savings, work relief, and an increase in quality. The product's target group consists of facility management companies that provide cleaning services on behalf of end customers as well as customers from the industrial and retail sectors. 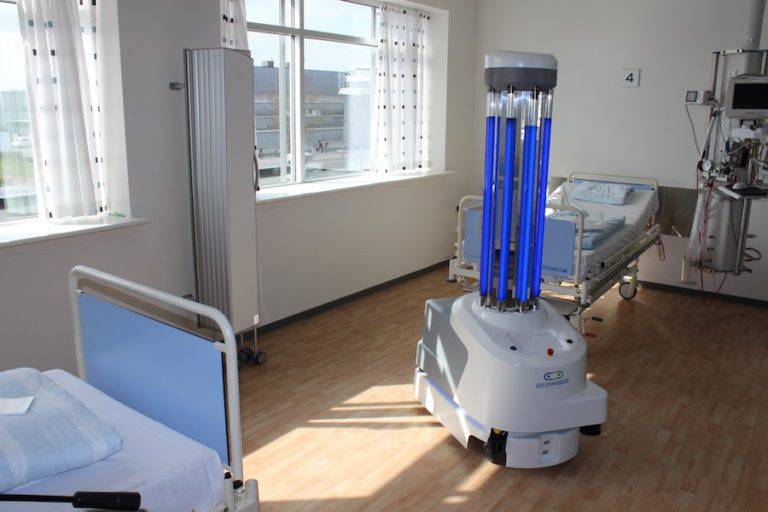 These 10 Disinfection Startups Could Help Reopen Factories, Warehouses, And Other Large-Scale Facilities

Adlatus Robotics is included in 4 Expert Collections, including Robotics.

These companies are featured in our Tech Market Map Report — New Products & Services For Retail In Cleaning & Sanitation Tech.

Courtesy of Ahold Delhaize Dive Brief: Ahold Delhaize has chosen European robotics companies Fybots and Adlatus Robotics as the winners of its first Cleaning Bot Challenge, a competition that began on May 19 to find smart technology solutions to clean stores,  according to a release . Initially, over 380 companies were scouted, with only nine making it to the finals. The contestants pitched in two tracks, with the first involving directly applicable cleaning solutions. Fybots, of France, won that track for the flexibility of its autonomous technology. The second track centered on promising future opportunities that can be co-created. Germany-based Adlatus won this track because of the strength of its technical capabilities, Ahold Delhaize said. The robotics company will develop new applications for its robotic technology in partnership with Ahold Delhaize’s AirLab. Dive Insight: Ahold Delhaize’s challenge to find a startup to create a cleaning robot spotlights the company’s efforts to bring smart technology to its stores. A cleaning bot would free up time for store associates to focus on doing other tasks, and seeing one roam the aisles could help customers feel safer shopping in stores. “A clean environment for associates and customers is now more important than ever,” Frans Muller, president and CEO of Ahold Delhaize, said in a statement. "Cleaning tasks are often physically demanding and include many repetitive tasks. Increased cleaning cycles, due to COVID-19, have put teams under a lot of pressure. Robotics can help these associates.’’ Due to COVID-19, Ahold Delhaize has implemented more stringent cleaning and hygiene initiatives like cleaning shopping carts before and after each use. The pandemic has sparked a wave of new technology to aid in the new store processes. For example,  Brain Corp , a company that transforms manual machines into autonomous devices using its own software, called BrainOS, has partnerships with major original equipment manufacturers to create floor autonomous cleaning robots for retailers. Walmart has also invested in cleaning bot technology, with robotic floor scrubbers now working in hundreds of stores. The cleaning contest is not Ahold Delhaize’s first foray into robotics. Last January, the company announced it would roll out shelf-scanning robots called “Marty” to 500 Giant/Martin’s and Stop & Shop stores after a successful test at two locations. In 2018, the company partnered with Delft University of Technology to fund robotics research that will develop and test innovations. The partnership was an expansion to its Artificial Intelligence for Retail (AIR) Lab, which launched that same year. Its cleaning bot challenge was conducted through its joint industry lab, according to the press release. Follow Krishna Thakker on Twitter

YPSICON is a technology-based company with headquarters in Barcelona. Its activity is focused on the development of new technologies, as well as on the design and manufacturing of components and equipment for the food, pharmaceutical, and cosmetics industries. It is commercializing three patented technologies: the sterilization by means of UHPH, UV-Therm Pasteurization, and the sterilization of bottles by means of ultraviolet light.

Gaussian Robotics provides robot autonomous navigation and positioning solutions that can be used in banks, restaurants, security patrols, and other areas of the service robot.

Enputech manufactures and is a global distributor of ultraviolet (UV) sterilizers, air purification & sterilization systems and high powered ultraviolet sterilizers which emit a large amount of ultraviolet rays 253.7nm (nanometers) & have germicidal effect. It's useful for sterilization of the surfaces of bed mattresses, personal hygiene items, kitchen utensils and smelly air. The company's large air purifiers include a 4 photo-catalyst honeycomb filter, 3 UV lamps, HEPA filter and ion generators. This process aims to reduce allergens such as pollen, pet dander, dust and odors which will reduce airborne viruses, bacteria, mold and mildew. Its can be used in the school, hotel, and hospital/laboratory industries. Sterilization systems use a photo-catalyst honeycomb filter. Contact with the Photo-catalytic filter decomposes poisonous gases and prevents organic material from passing through it. The active carbon holds the gases and organic material is captured in the cavities of the honeycomb filter.